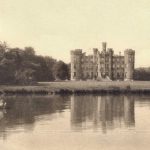 The castle is located in Moulbaix in the province of Hainaut. It was built by architect Desiré Athois Limburg in 1860 neo-Tudor style in order of Marquis Du Chasteler Oswald. The castle replaces an old house from 1502 and is built on the old feudal fortress, there are still found some remains of it in the castle. The castle has a total of 344 windows and is surrounded by a park of 62 hectares.Until 2007 it was occupied by Nadine Spoelberch (1922-2007), Countess d’Ursel, after that it has been sleeping and falling apart. Story goes that it is known as a haunted castle. New owners have fled the castle, there have been three suicides, two children disappeared and have never been found again and a burglar would have been found dead on the stairs. In September 2015 it was decided to sell the castle to the public. It is now sold and being reconstructed.

May 12, 2014.
I really feel for the owners of this place… Failed the first time we’ve visited this beauty, had more luck the second time. I could have spend weeks in here and felt like a little kid in an enormous candy store ?. What an amazing place and what a blessing to have been here.

Nov 07, 2015.
A dream for my son Bo! He has been talking about exploring ever since he could talk, so a chance to visit the famous chateau the legal way just had to be done! I’m happy I’ve visit this pearl in it’s urbex glory days but I forgot about the back of the castle back than… Happy I can also add this to my collection now. The chateau has been sold in 2016 and is now in the hands of a new owner. The place is locked up and all furniture is gone.

Movie and voice over by Bo ❤.