History and information about Chateau The Noisy. 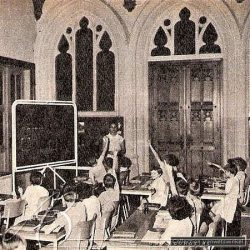 The Château was built in 1866 by the English architect Edward Milner under commission from the Liedekerke-De Beaufort family, who had left their previous home during the French Revolution. However, Milner died before the Château was finished. Construction was completed in 1907 after the clock tower was erected. Their descendants remained in occupation until World War II.A portion of the Battle of the Bulge took place on the property, and it was during that time, the Château was occupied by German forces. In 1950, Château Miranda was renamed “Château de Noisy” when it was taken over by the National Railway Company of Belgium (NMBS/SNCB) as an orphanage and also a holiday camp for sickly children. It lastedas a children’s camp until the late 1970s. The Château has been empty and abandoned since 1991 and is in a derelict state, succumbing to decay and vandalism. Parts of the structure were heavily damaged in a fire and many areas of the ceiling are collapsed. Demolition of the castle began in late October, 2016 with the conical gothic roof peaks being removed.